A man who I had had sex with after our friend had suicided told me I was the physical manifestation of his mourning. That same year a man who I had had sex with in somebody else’s bed and who was extremely beautiful but had a girlfriend who was probably also beautiful said to me ‘I’m just really good at incorporating the lost object into my melancholia.’ Both of these men who I have slept with believe my body to be death or to be lost. Perhaps, since – perhaps since it feels that these men were not entirely concentrating when they slept with me or dumped me, I could build a new body to be their substitute object instead – the pillow under the duvet in your mother’s house, with hair collected from the tails of horses substituting yours, across the sheets. Then she could stop being death perhaps, after Capitalism no one will have to work.

Builds a body out of crevices and absences and mud and shit and hair. Paints it pink and when she goes to lay it in her bed, stubs her toe on an improper thing at the bed’s edge. Lifting up the covers she finds an object almost exactly like the one she has just made, its calcified sister and her sister and her sister’s sister, forty hardened bodies cast from folds and holes and gaps between her body or the bodies of dead women or their children in her dreams.

some men have mistaken me for death is a new (2017/2018) project, currently comprised of text, performance, sculptural and moving image work. The project is concerned with queering the figure of death, alongside the dead, the ghost, the traumatised. The project began with a text commissioned for Zoe Kreye’s exhibition of sculptures and performances at SPACE gallery in London in 2017. A version of the text has been published by Squash Editions, Mexico City and performed in Reading at The Rising Sun Arts Centre.

The most recent iteration of this ongoing project was presented at Mimosa House in the form of a collection of ceramics, a 16mm slide projection moving images work, and a performance,  as part of their ‘Queer Futures’ program, March – May, 2018. 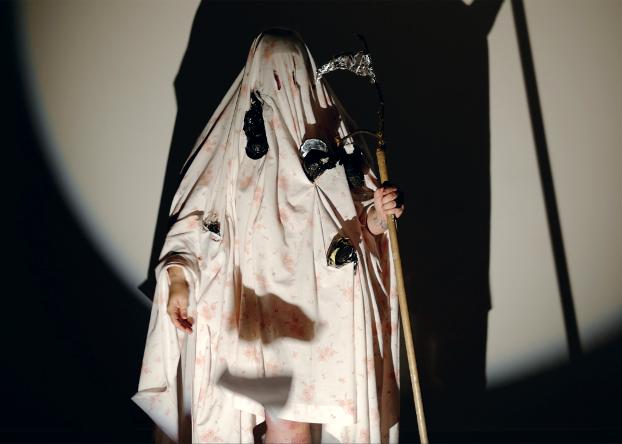