Building on my practice-based research into mutation, queer, traumatised, and postcolonial outsider bodies, and feminist material institutional critique, After the Ice, the Deluge expands to include environmental and temporal ecologies.

This project began with twin investigations of Morgellons (a syndrome, commonly diagnosed as a kind of contemporary hysteria, whereby the sufferer finds fibres, crystals, and other alien objects under its skin); and melting icebergs. The project considers the disappearance and reappearance of crystals (both water crystals and those found by Morgellons suffers) as simultaneous and related embodied crises, as crises of boundary integrity.

The work has developed to investigate melting polar ice caps both as traumatised bodies, and as a crisis that can only be rectified by traumatised bodies, since via Post Traumatic Stress Disorder (PTSD), we already function as time machines (PTSD is always in the present that’s why you can’t hide from it. As if there is a hole between timelines, or, a glitch. Your body in the present disappears, or, is overlaid by your body of the past, the no-longer-yourbody of the event. We are told that the most dangerous part of time travel is the possibility of meeting a version of yourself somewhere along the way).

In 2017, iterations of After the Ice, the Deluge including sculptures, drawings, collage, performance, and writing, were published by Res. Galleries and exhibited in the Kunstverein in Dusseldorf and DISTRICT Berlin as part of ‘Class Languages’; Syndicate in Cologne as part of ‘Something II Be Scared Of’; and at IMT Gallery,London where performances were live streamed by THISISTOMORROW, with the full recording available here.

In 2018, I produced a dual projection 16mm film in residence at no.w.here . The film, After the Ice, the Deluge, was screened as part of Something III Be Scared Of , also at no.w.here, with Sam Keogh and Joseph Noonan-Ganley.

The film will also be screened at LUX on Sunday May 20th. 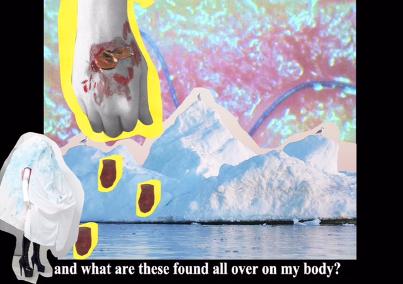